Posted on September 25, 2015 by captaingreyhound 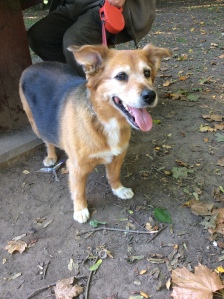 We went to the woods yesterday which was super. We met up with Big Rabbit in the car park. The Fairy keeps telling me that she’s a small dog but I know better. To be fair, she does bark a lot but that’s not conclusive evidence as far as I’m concerned. She’s probably quite pretty but it’s hard to get a good look at her because she never stands still.

We came across a really steep bit on our walk and had to walk downhill using these sort of stepping stones. I went first to start with, and we had to go very slowly because it was tricky getting my back legs to follow my front ones. Poor Fairy was very nervous and slow, so I had to change position and walk behind her legs.

For some reason The Fairy was very pleased with me when we got to the bottom and gave me loads of kisses. Apparently it’s very difficult for greyhounds to go downhill on stepping stones and I had managed to come all the way down a massive hill on my first attempt.

Big Rabbit had no trouble at all and actually kept turning around and going back up every few steps. From where I was standing she looked a bit like Fred Estaire dancing on one of his big Hollywood staircases. My professional opinion is that she just lacked direction and didn’t have any idea which way she was supposed to be going.