245. Wildlife, Wildlife Everywhere, Nor Any Brain In Sight – by Monty

Over the last few months I have struggled to keep on top of the invading wildlife. Some incidents have been more serious than others, though none more outrageous than the Brainless Bird Incident of June 2019.

For whatever reason, there is a hole in a brick on the outside wall and a starling built a nest in the cavity. It threw out a large amount of insulation and set up shop. When the birdlets hatched, we could hear them through the living room wall.

One evening, The Fairy said she could hear a bird in the downstairs toilet facility. She persisted with this notion and a few hours later, determined to smash open the toilet ceiling with a hammer. Luckily, the only tool on hand was a screwdriver so she decided to open the ceiling fan instead because that was where the noise was the loudest. 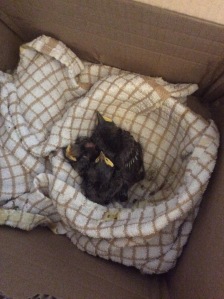 To my surprise, she reached in and extracted two very noisy birds. The Fairy put them in a box and rang the emergency vet who didn’t mind at all that he had been called in the middle of the night. The mother bird hadn’t been seen since dinner time and the birdlets didn’t have any wing feathers. The Fairy thought that if she pushed them back into the hole in the wall they would just make their way to the toilet again. She decided to take care of them overnight. About an hour later, she found another one looking out of the fan! The following day the birds went off to the wonderful Rase Vets.

Which leaves us with this question: What kind of brainless animal purposely tries to break into a toilet?

I rang The Station with regards to having them arrested for Breaking and Entering and Criminal Damage. PC Dave said that unfortunately there’s no law against being stupid.

Naturally, he was referring to the birdlets and not to myself.

The first night of living our new nocturnal lifestyle has ended in carnage.

We began the evening with high hopes and a spate of congratulatory statements about our excellent plan. Not long into the experiment however, the heavens conspired against us and a wealth of thunder, lightning and heavy rain descended.

After one unnecessarily loud clap of thunder, I made my way carefully though purposefully towards my office where I had left some important paperwork which needed attending to. On the way there, I caught the wire of the fan and dragged it three foot along the carpet. In an effort to get out of the way, I tripped on the vacuum cleaner (why is it even there; it’s never used) and banged into a set of step ladders which came down with enough noise to drown out the thunder.

At this point I decided to abandon my foray into nocturnal living and went into the hallway for some peace and quiet and perchance to sleep.

When I awoke this morning I found that we have a new Prime Minister in the shape and form of Boris Johnson.

It is entirely possible that I have concussion.

My views on wildlife are well known. There is a time and a place, but that time is never and the place is not my garden. I am at odds here with The Fairy, who actively encourages it.

It will come as a surprise then, to hear me praising the hedgehog. There are quite a few who invade my territory on a nightly basis, bringing fleas and …… other things. Last night I was out late and had occasion to strike up a conversation with one such visitor. We passed the time of day and in keeping with tradition, discussed the weather.

It turns out that hedgehogs have an excellent technique for dealing with the heat of summer. They are nocturnal. Simple yet effective. I have been reliably informed that the only reasons hedgehogs come out in the day is if they are hungry, thirsty or ill. If you see one out in the daytime over the next few days, it will probably be thirsty and very appreciative of a bowl of fresh water.

I informed The Fairy who has placed additional bowls of fresh water around the garden. I also informed Chicken that for the next week at least, we are going to adopt the most excellent hedgehog strategy of sleeping during the boiling hot day and waking during the night.

Yes people – we are going nocturnal. All hail the hedgehog.

Teaching is a strength of mine. Yesterday morning I delivered some high quality training to Chicken about Fake News. As you can glean from Chicken’s post, I successfully taught her how to produce Fake News. The news she presented, was FAKE. Fake News. I’m sure that you will all join me in congratulating her on passing the course and writing an article which is of an acceptable standard, and FAKE. We will now move on and never mention it again.

THE IMPORTANCE OF THE RIGHT KIND OF BED 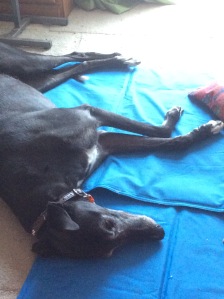 Being cool whilst staying cool

As you may remember, I have an electric bed which keeps me warm during winter. There is some dispute about the heat setting that should be used, though I think The Fairy has accepted that her choice of Level 2 is inappropriate, and Level 3 is now the ‘go to’ setting.

Summer is here so I have now taken delivery of a new bed. It is a cool bed full of cool gel and is of the correct proportions for an extra large greyhound. There are many different kinds on the market but mine is a Pecute one and works exceptionally well. As The Fairy says, it is of the upmost importance to keep dogs cool in extreme temperatures.

Other animals are available as pets, but dogs are the best.

Monty had a tick on his willy.

The Fairy did take if off because she does know how to all take them off dogs and children and Monty did behave like a baby.

The Fairy did say: How did I get to a point in life where I is taking ticks off Monty’s willy? She did then run outside and throw it over the fence into Next Door’s garden. They was out shopping. 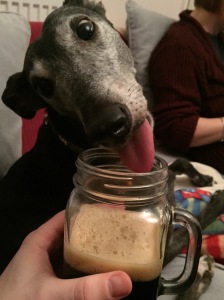 The Fairy did do lots of complaining about it and then Grandad did come and force her to cut the grass because he did say two foot is two foot too long for a lawn. I did say that I did always know that two feets is rubbish but four feets is best. Then I dids have to do loads of big work tidying up the garden and I does blame Monty and his stupid tick.

Arky Parky did do visiting and I did try to steal his beer and he did say NO NO NO and I did say BUM BUM BUM.

Can life get any more turbulent?

I have been watching and waiting, but have thus far not received any official communication requesting my assistance with any of these pressing issues. I stand, as always, ready to spring into action should the call come.

What is required in these delicate situations, is delicacy. One must never underestimate the power of respect. Show respect to your fellow man and he will show respect to you. Remain discreet in order to gain his trust. Show restraint at all times. Associate only with those who share your good character and avoid those who revel in sensationalism. 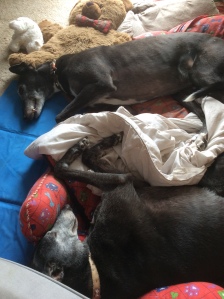 Back – with our usual energy

For my part, I have a very small inner circle whom I trust implicitly. I would not make the mistake of sharing my private life with anybody who was likely to blab all to the press. That would be very remiss of me indeed. For example, yesterday I had to endure a rather unfortunate event involving a small animal of the insect variety. It was dealt with to my satisfaction in a very professional manner, and will forevermore remain private.

Now, I must go and find Chicken.