245. Wildlife, Wildlife Everywhere, Nor Any Brain In Sight – by Monty

Over the last few months I have struggled to keep on top of the invading wildlife. Some incidents have been more serious than others, though none more outrageous than the Brainless Bird Incident of June 2019.

For whatever reason, there is a hole in a brick on the outside wall and a starling built a nest in the cavity. It threw out a large amount of insulation and set up shop. When the birdlets hatched, we could hear them through the living room wall. 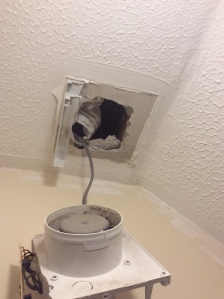 One evening, The Fairy said she could hear a bird in the downstairs toilet facility. She persisted with this notion and a few hours later, determined to smash open the toilet ceiling with a hammer. Luckily, the only tool on hand was a screwdriver so she decided to open the ceiling fan instead because that was where the noise was the loudest.

To my surprise, she reached in and extracted two very noisy birds. The Fairy put them in a box and rang the emergency vet who didn’t mind at all that he had been called in the middle of the night. The mother bird hadn’t been seen since dinner time and the birdlets didn’t have any wing feathers. The Fairy thought that if she pushed them back into the hole in the wall they would just make their way to the toilet again. She decided to take care of them overnight. About an hour later, she found another one looking out of the fan! The following day the birds went off to the wonderful Rase Vets.

Which leaves us with this question: What kind of brainless animal purposely tries to break into a toilet?

I rang The Station with regards to having them arrested for Breaking and Entering and Criminal Damage. PC Dave said that unfortunately there’s no law against being stupid.

Naturally, he was referring to the birdlets and not to myself.

4 thoughts on “245. Wildlife, Wildlife Everywhere, Nor Any Brain In Sight – by Monty”