Posted on August 4, 2017 by captaingreyhound

We have been weighed. Between us, we have lost 200g which in real money is 8oz which in real life is ENOUGH. The Fairy is rather confused, but being in receipt of all relevant information, I fully comprehend the situation.

We have bested her. My superior intellect and highly advanced survival skills have ensured Chicken and I have not starved to death. It is not easy to keep a good dog down – and I happen to be Great.

As soon as I realised that the diet situation was to be ongoing, I formed a secret organization called FOOD CLUB.

This being the case, and bearing in mind my absolute devotion to rules and regulations, I only intend to hint at my activities as a member of Food Club. 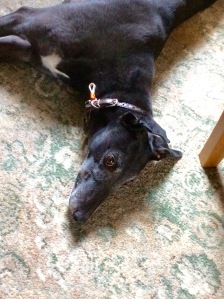 Let’s just say that the hedgehogs who have invaded my garden are not as big as they could have been, had they made it to the cake and peanut butter before I did. Let’s just say that The Fairy wasn’t loosing her mind when she couldn’t locate the digestives that she was sure she had purchased at the supermarket. Let’s just say, for arguments sake, that certain cupboards and a certain fridge freezer may not be as well stocked as they are believed to be.

On the plus side, my reputation as a stealth operative is completely intact.