Posted on December 30, 2018 by captaingreyhound

Ugly Cats has been living with a ferret.

I did say to Monty that ferrets smell and Ugly Cats smells and he should all go back to his smelly ferret. Monty donty did say I had to be kind to him because he had all been out in the field and I did say bum. 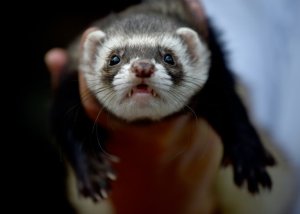 At this Christmas I did sleep in the comfy big bed and eats nice foody food and gets lovely presents so I is happy. Ugly Cats is even more ugly than he used to be and now he has big scratches on him and scruffy fuzz hair. I did say it was his own fault for being next to a ferret in a field and Monty did say again that I did have to be kind, so I did tell Monty to go and live with the smelly ferret if he does love him so much.

Crinkle and me together is all thinking of a plan to get rids of the smelly ferret and Ugly Cats. They is smelly and ugly. BOOM! BOOM!