Posted on September 5, 2019 by captaingreyhound

SAD AND THEN HAPPY STORY 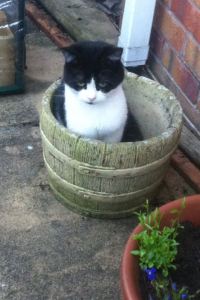 Crumb Bum now has his own pot

Then one day the lady from the second-hand cat hotel did come with a shopping trolley and did take the scared cat to the hotel in the shopping trolley. They did give him a chip. I does think they were mean to give him just one chip and they could have given him a full bag.

The poor cat was very scared and then Auntie Sister did get him and take him to her house and he did hide for weeks and weeks and weeks. Then one day he did fall in love with Auntie Sister and did want cuddles and kisses all the time and at last he was happy happy. He grew proper big legs so his tummy was all not on the floor anymore and he did also get a name. He is all called Crumb Bum because he has crumbs on his bum.

Monty did say that a lot of the peoples in the government has lost their whippets.