68. Ugly Cats Is Watching Me – by Chicken

Posted on April 4, 2016 by captaingreyhound

Today Monty is all strutting about saying how his meeting was all successful and he got everyone to agree with him. I did get bored after listening to him for two minutes, but he did keep talkering so I went into the big garden to play. 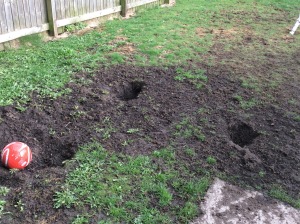 Playing dot-to-dot in my garden

First I did do some more digging on my holes. I is going to dig loads more and then join them all up to make a big trench to show Monty. Then I did notice Ugly Cats watching me from the back fence so I did go to shout at him. I did say that he wasn’t allowed on my fence and he did say he could do what he wanted, which is all not true. Monty said that cats is not allowed in my garden and I did say this to Ugly Cats.

Ugly Cats did say that he wasn’t scared of Monty so I did tell him that Monty was angry about the digging and that I had telled Monty that Ugly Cats had done it. Ugly Cats then did say that I would be sorry that I’d done that, and that I didn’t know who I was dealing with.

I did all say that he was very stupid because I knew who he was and he is called Ugly Cats. He then did go all bristles and sharpy claws so I did try to catch him by all jumpy jumping. Ugly Cats did then run away and I did go to get Monty, but he did say he couldn’t see any cats. He is all slow sometimes. Monty said he would all take care of me if Ugly Cats tries to get me, so I loves him all again.