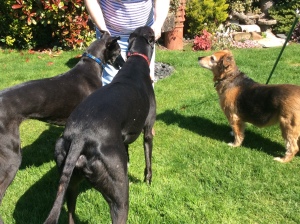 Getting extra goodies from Grandma

We has all been on holibobs for some days to Grandma and Grandad’s house. I all did have to go to tells Big Rabbit that me and Monty is all enraged. Me and Big Rabbit did all talk about what we is going to wear and Big Rabbit did say that she needed a new hat. I is all so excited because now I is Monty’s fancy. We did get loads of extra sausages and cakes and cuddles at Grandma and Grandad’s house and did go out together with Big Rabbit.

We dids get home yesterday in the afternoon and all inspectored the house and garden to make sure everything is all safe. Monty did think that dangerous hedgehogs had been in the garden so checked all inches of it. When we did go for a walks it was all rainy wet so we did put our big coats on and big Monty did complain all the way. I did see Ugly Cats following us again so I was all mad.

This morning in the very early, I did go out but Monty did not go out because it was all still raining. Ugly Cats was sitting all ugly on the shed next door, so I did go to shout at him. He did say that I still hadn’t said thank you and I did say I had nothing to say thank you for and he did say he was hurt. Then he did say he had missed us and I did say that we had been to see Big Rabbit and talk about the enragement but that Ugly Cats wasn’t allowed to know because he wasn’t coming to the wedding and he did say he was even more hurt and I did say good. Ugly Cats did all look sad and did walk away sadly and then I did see my biggest trench so did go to do digging in it.

The Fairy did say that I all wasn’t allowed to bring the muddy mud into the house and did try to pull my feets off with a towel. Then Monty hero did save me by takings the big towel off The Fairy and running around with it. The Fairy did say she was all wanting to go backs to bed.