I did some research in the area of outstanding athletic ability, and found some very interesting information. I had initially planned on entering only the running races at the Olympics, as this is where my talent really lies. However, the fastest man on Earth, Usain Bolt, has never exceeded 30mph, which is no competition for me. I thought it would be unfair to compete against him, so have decided to train for one of the other disciplines, with a view to entering the 2020 Olympic Games instead.

In the meantime, I have organised a schedule of athletic events, in which Chicken and I can compete against each other in our own Independent Olympic Games.

I decided to start with gymnastics, in an event which I have called precision jumping. The object is to clear an obstacle in the most graceful way. Points are awarded for asthetics, technical ability, execution and landing.

As usual, Chicken went first, and put in an acceptable performance, in that she did jump. I then followed, showing how it should have been done. When the points came in, I had won with a score of 15.266 against Chicken’s 14.938. 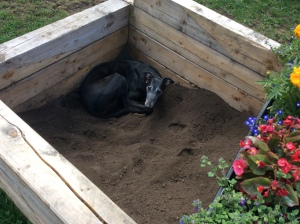 Day 1 of the Independent Olympic Games

She was furious. She demanded to speak to the stupid judges. She said that there was no way I could have scored that highly, as I had put my foot down during the jump. This is total rubbish of course. I think I would have known if I’d put my own foot down.

When we got home, I took it upon myself to lecture her about good sportsmanship, and she took it upon herself to go and sulk in the pit. This really is not the kind of behaviour I expect at the Independent Olympic Games.