Yesterday I was head-butted by a cat. It was a grey tabby, who I had met once before last August. The first time I saw it, it ran across the road to me and sprawled on the pavement on its back. The Fairy said it was being friendly and probably lives with a dog. Last night, it was sitting in the middle of the pavement and we all assumed that it would move when we came closer. It didn’t. It waited until we were very close, and then ran at me.

I was taken off guard, and it was out of range within a split second. Chicken launched herself at it, but couldn’t get to it because I was in the way. We were both on high alert for the rest of the walk, and did actually see a further four cats. There really are too many cats on my estate if you ask me. Ugly Cat has not been seen for days. I don’t know whether this is a good thing or a bad sign. 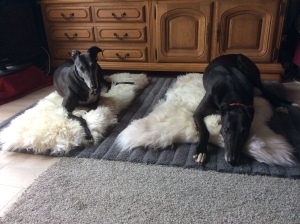 Do we look spoilt to you?

We have taken to walking a lot up the hill, through the woods. At the top of the hill there is a lovely view, and a wide open expanse of heathland. All the way up and down the hill, are baby rabbits. At the moment there appear to be hundreds, but I doubt there will be more than one or two left in a couple of weeks. A few hopped off when they heard us coming, but most of them just sat there, even the ones on the path. Chicken said they were ‘thicky thick thick,’ but I am more inclined to believe that they are just lazy, and have only read the first section of The Freeze, Flight or Fight Manual. This illustrates very clearly, the importance of children completing all their homework. If they only do a little bit of it, there is every possibility that they will get eaten by a crow.

The Fairy has bought us a sheep each. I have never met one which is alive, but if the dead ones are anything to go by, I think I may have found a species of wildlife that I actually like.