Two days ago I was invited to return to my kennels. I was pleased about this, as I spent four years of my life there and was a particular favourite. Upon entering the establishment, I was greeted by a round of applause greyhound style, which I felt was fitting.

I completed an inspection of the premises by 8am and was then settled into a double room with quilts, along with Chicken who had insisted on coming along with me. I had a long conversation with the large greyhound next door; an old friend of mine called Big Mac. He’s currently training to take part in next year’s Britain’s Strongest Man competition, so we whiled away the time talking about training techniques, and the discrimination that greyhounds face when trying to enter human competitions.

Late in the morning I delivered two training sessions to separate groups of greyhounds. The first was on counter steering, and aimed at those still racing. Cornering well can make all the difference. The second was a lecture which I delivered to those who had already, or were about to, retire. It was based on the book How To Win Yourself A Home And Control Your Humans Once You’ve Got There, and also on my own experience. I was heckled throughout by one particular Chicken, who kept shouting bum from the back. I rose above it. 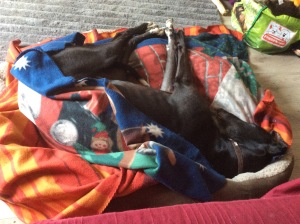 Back at home after a long day

Later in the afternoon, I had a small corn removed from my foot which made me feel a lot better and allowed me to walk properly again without pain. This situation was short lived however, as I cut the top of my front foot whilst conducting a parade in the paddock. Chicken said she wanted one too, but I said she wouldn’t be able to cope with it. She said she could cope with about ten of them, which I doubt.