Posted on December 18, 2017 by captaingreyhound 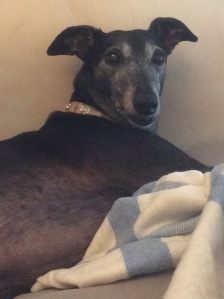 This morning I received a communication from Father Christmas. He is not in a good mood. Apparently, Rudolf is refusing to fly unless Chicken apologises for last year. As you may recall, Chicken was rather rude to Rudolf and the poor thing was left out in the cold after being led to believe he was to be the guest of honour at a meal at our house. The invitation had to be rescinded at the last minute due to Chicken. I don’t mind telling you that I was rather embarrassed.

Naturally, and as usual, Chicken is refusing to apologise.

If I do not manage to illicit a heartfelt apology from her, Christmas will have to be cancelled. The first round of negotiations stalled at the first meeting held this morning.

Chicken is simply refusing to entertain the idea that she was in the wrong, so I will have to use my extensive diplomatic skills to find a solution. Failure is not an option. The Fairy has suggested that I provide some form of carrot to help Chicken make the right decision. In theory, a little bit of give and take on both sides should result in a satisfactory outcome.

Time is of the essence. I have told Chicken that she should go away and think about what she would need in order to be able to provide said apology. Hopefully she will come back with a proposal which will allow for a settlement to be drafted.