252. Britain Beats Every Other Country In The World – by Monty

Posted on September 3, 2019 by captaingreyhound

Britain has won the Global Voting Competition, coming first in almost every category including: Most Frequent Voting; Best Excuse For Voting; Worst Excuse For Voting; Most Meaningless Vote, and Greatest Number Of Repeated Votes For Exactly The Same Thing. It was also awarded the Country Most Likely To Have Another Vote Before The End Of The Day trophy.

We are all feeling very proud.

We recently spent the day with Sister at Grandma and Grandad’s house, as I am supervising the building of a new pond. It dawned on me that whilst we see Sister, we no longer visit her house. I was perplexed by this, so surreptitiously sent Chicken to mingle with them to see if she could glean some information regarding this matter. 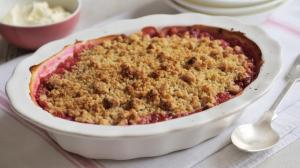 Who wouldn’t eat the crumble?

I will not pretend that I understood everything that Chicken said, but she appeared to be reporting that Sister always has a fruit crumble in her house, and The Fairy is worried – quite rightly, I concede – that Chicken and I would eat it.

I have called a meeting with The Fairy to clarify some of the finer points. Sister is always so kind to us, that I find it difficult to believe she would object to us eating the crumble. If need be, we will have a vote to settle the issue of visiting Sister’s house.