Posted on February 22, 2017 by captaingreyhound

I is back! I has all managed to steal the iPaddy off Monty donty wee foot.

Last nighty in the dark time I did go for a walks all on my own and I was with Arky. Ugly Cats did follow me and he did tell me that he was going to find a place to hide from the big wind because the big wind was coming. He did say that I had to all hide and I did say that Monty would all take care of me. Ugly Cats did laughing and did say that I all wouldn’t be safe if it was left to Monty. I did big barking at him because he is not allowed to say things about Monty. 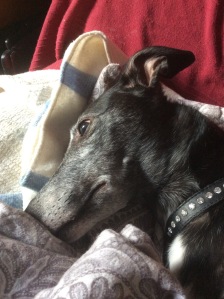 I did some remembering and did remember that Monty did exploding in the garden when he did eat a whole big cake. When I asked Monty about his exploding bottom he did remembering as well, and did realise that he hadn’t had a big cake for years and years months. He did go off to the food kitchen to all find out where his cake was.

I did go off to all look for a gas mask.