‘‘Tis the season etc. Usually at this time of year I am full of joy and goodwill to all. However, the word ‘all’ when used in this context does not mean everybody. As a general rule of thumb, it means everybody – except wildlife. Of any description. 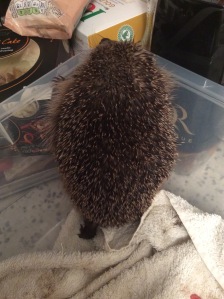 Yesterday evening we had an unexpected visitor of whom I seriously disapproved. The Fairy seemed to be carrying out some kind of scientific experiment on it, involving weighing scales and MY FOOD! Chicken thought it was an early Christmas present and didn’t respond well to being told that it wasn’t hers. As I was within biting distance, my first thought was that eating it would be the quickest way to get rid of it. This didn’t go down well with Chicken or The Fairy. 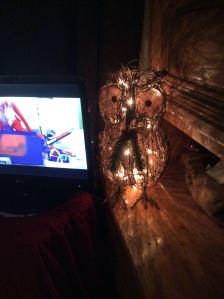 Luckily, The Fairy threw it out again after declaring it to be fat, in good health and eating well. I thought that was the end of wildlife in my house but today a rather pompous looking owl turned up. The words gaudy, ostentatious and exhibitionist spring to mind. Apparently, it is staying with us for the whole of the Christmas period. I will not be engaging it in conversation.

Negotiations have recommenced with Chicken about the Rudolf apology. I am determined to reach an agreement by the deadline of Christmas Eve. Father Christmas is pushing for a deal as early as possible, but as I have said many times before: Good things come to those who wait.