218. Using Your Slow Cooker At Christmas – by Monty 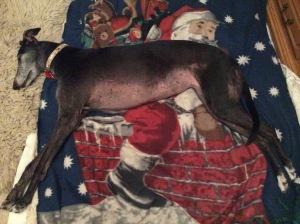 The best setting for my new electric bed is 3. This is the hottest setting. I have been conducting endurance tests on it, to ensure it complies with all Health and Safety regulations. It does. However, my lying on it for nine hours at a time and the fact that Chicken has abandoned the settee in favour of said electric bed, has drawn the attention of The Fairy.

Today she put her hand under my rib cage and realised how hot I was. According to her, my sleeping on it for nine hours is the same as being stewed in a slow cooker. I see no problem but The Fairy immediately turned it down to 1.

I tried to turn it back up again but could not do so with my paws. There is a design fault in the control pad. Fear not people – I have a plan. I will limp badly until she turns it back up.

1. The hedgehog’s visit has had an unexpected positive impact on the Rudolf apology situation. Chicken was very upset when the hedgehog left, so I used this to explain how upset all the children will be if Father Christmas can’t deliver their presents.

2. Although I may have rather pushed the boundaries of honesty, I also told her that the polar bear had apologised for looking at her in a mean way. It didn’t. It’s made of plastic.

Chicken has responded well and I’m pleased to report that this two pronged approach has secured from her a promise to apologise to Rudolf on Christmas Eve, just in time for Christmas to go ahead as usual.

4 thoughts on “218. Using Your Slow Cooker At Christmas – by Monty”