Posted on March 31, 2016 by captaingreyhound

There appears to be a communication problem with the kitchen staff. Although I order well in advance, I keep being presented with dog food concoctions instead of steak. Due to other pressing matters however, I will have to deal with this at a later date.

It seems the ground is far more unstable than I had thought. Another large hole has opened up overnight in the exact spot where Chicken had been sunbathing. I’m worried that the whole garden will disintegrate if something is not done quickly, and it would be tragic if Chicken disappeared into a hole in the ground. I might need to cordon off the garden for safety’s sake. Chicken tried to blame it on Ugly Cat, who she says has been watching her again, but I doubt it has the necessary skill to dig such a deep hole. It is more likely to be the result of the illegal fracking and it is high time this was stopped. 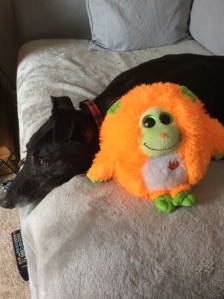 I intend calling an emergency meeting in the near future. Arky-Ollie-Just, PC Dave from the Station, Bob at the Council and Simon from the DECC will all be invited. Chicken will be in attendance but will be given strict instructions not to say anything.

Speaking of Chicken, she has been working hard during our training sessions and I am pleased with the progress she is making. She has developed an obsession with my new orange toy however, so I am having to carry it around with me everywhere. This is just to keep it safe though; not because I am in love with it.