I will be the first to admit that I never rush into things. Prior Preparation and Planning is my mantra, and this process should never be rushed. Further to this, it is essential that all Health and Safety issues be addressed and any elements of potential danger be assessed properly before proceeding with any activity. This includes such activities as going out into the garden, or getting out of the car. You can never be too careful.

You can, however, be painfully slow, as I have found out since taking up residency in my forever home. One of the reasons I chose to live with The Fairy is that I like a challenge. There appeared to be a lot of work to do in the house and garden, and The Fairy was obviously in need of a good project manager.

Much to my disgust, every project that I have put forward has been scuppered or postponed. My Trench Building Project was stopped by Bob at the Council, and my Mud Head Project has yet to see the light of day. The wildlife exclusion zone which incorporated the whole of my garden, has been breached with the help of The Fairy, who constantly entices wildlife in with food. Sink holes have appeared, and grass has disappeared, due to the illegal fracking activity in the area.

Waiting to be planted

So you can imagine my excitement when it was announced that finally, work could get underway. Pete Who Can Build Anything is coming in a couple of weeks to lay the patio, and plants and shrubs have appeared in the garden, ready to be planted. A large pile of wood has been delivered, but there are no accompanying plans, so I can only guess what is to become of that. Most interestingly, we now own a large rabbit hutch. 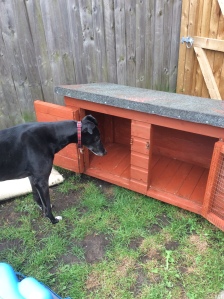 The Fairy insists that we are not getting a rabbit, much to Chicken’s disappointment, but I am absolutely convinced there is one in there already. Every time I go into the garden, I go to check for it.  My record for staring at the hutch, stands at seven minutes. I can be incredibly persistent when the occasion calls for it, and the rabbit cannot hide forever.

The garden refurbishment is finally getting underway.