Yesterday, work started on the garden. 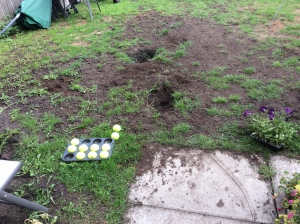 Job 2  Empty the holes to check whether they had been filled correctly in the first place. (They had.)

Job 3  Move the wood from one part of the garden to another.

I can’t work out whether The Fairy has actually built something, or whether she’s just made the effort to pile the wood up neatly. When I asked her she said it was a surprise. Ugly Cat said it was a raised bed, but Chicken said he was an idiot because a raised bed is known as a settee, and is always in the living room. The Fairy said it was not for plants, which leads me to believe it is a containment area for some kind of animal.

We already have a rabbit, albeit an elusive one, and now I fear I am being asked to accommodate yet more wildlife. Chicken is hoping it will be a kangaroo so they can have jumpy jumping competitions, but I said a kangaroo could easily jump out of the structure, thus rendering it useless. It is more likely to be an animal that cannot jump, such as a sloth. Chicken said a sloth would be boring, but I said it would be a nice change from a hyperactive frog. She then went off to look for said frog, having totally misunderstood the meaning of my words.

TODAY IS THE BIG DAY

We are all going off to vote soon. I have decided to attend to mark the importance of the event, despite the fact that I have been discriminated against vis-a-vis eligibility to vote. I may or may not register my disgust at this situation. I don’t ordinarily take part in demonstrations, but there is an outside chance that I will wee in the hut by way of protest.