Posted on August 10, 2016 by captaingreyhound

The Independent Olympic Games is in disarray this afternoon, after one of the top athletes was disqualified from the 1m digging.

When asked to clarify the situation, The Fairy said that after a show of the upmost disrespect, Monty The Great had been totally, absolutely and irrevocably disqualified for weeing on the equipment.

She went on to say that, “It is clearly stated in the rules, that none of the apparatus is to be used as a toilet. Doing so negatively impacts on other competitors, and will not be tolerated.”

Chicken, who was declared the winner by default, said that she was sad that her gold medal had been awarded under these circumstances, but that she intended to accept it anyway, boom, boom.

This is not the first controversy to hit the games. An official enquiry is underway after claims were made that a winning athlete had been judging himself.

Posted on April 26, 2016 by captaingreyhound

Yesterday in the morning all early at half past five past, Monty did go out in the garden all huffy because there was a big dangerous thing all getting us. But it was not a dangerous thing it was just his birdie wee station that had all blown down in the windy wind. He did pace up and down in front of it and his heckles did all go up massive all the way to his big bottom. The Fairy did say that he looked like a dragon or a stegosaurus. Then he did attack it with a big wee.

When he all came backs inside he did say it was safe for me to go outside so I dids go out on my own. I did sniff about to see if a hedgehog had all been in my garden and when I looked up I did see Ugly Cats sitting on the fence. He did say hello and I did say why was he being all friendly because I didn’t all like him and didn’t want him to take my toys.

Ugly Cats did all say that he was the all most important cat in the streets and we should not be doing patrols without his permission. I did tell him that Montysaurus can all do anything he wants because he is all in charge of everything and he is big and strong. Ugly Cats then did say that he could do a patrol betterer than us because he could all go in places we couldn’t go and he can go at the nightime in the dark night.

I dids then tell him that we do the big nightime patrols all over and I did tell him where we go in the streets. Ugly Cats said he would all do the patrol first before us and I said our patrol was secret so he couldn’t come. Ugly Cats got all prickly and said I would regret not letting him be in charge because he was all important. I then did say I was all going to get Montysaurus because he gets rid of monsters in the garden and Ugly Cats runned away.

Posted on March 21, 2016 by captaingreyhound

The Fairy has finally decided to make my garden more interesting. Chicken and I love the fact that we can run around it without having to negotiate any kind of obstacle course, but it would be nice to have some features in it. I need to ensure that The Fairy doesn’t plan anything that will interfere with my Mud Head Project, but I’m sure she will follow any instructions that I give her. I am the project manager after all. 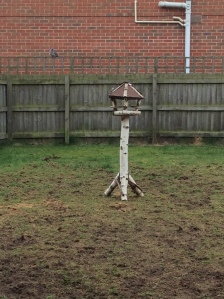 The first feature that she has put in for me is a rather posh toilet, which she has imported from Holland. It appears to have some kind of decorative top which resembles a beach hut. She twittered on about bird food but I really don’t know why. I would never allow her to do anything to attract birds into my garden due to the potential damage they could do to the already unstable grass/mud. She should know by now that I am very good at ‘restricting access to food sources’  where birds are concerned. 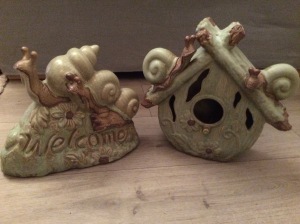 Further to this, she has also purchased two smaller toilets for me which are to go on the patio for the moment, but will apparently be moved to a flower bed when she gets round to planting one. I view these two with a little less enthusiasm than my main toilet. Firstly they will probably be harder to hit, as they are quite small, and secondly, they are ugly, if you ask me.

Chicken and The Fairy are beside themselves with happiness with the purchase, and are congratulating each other on their contribution to the rehoming of retired, injured or abandoned garden snails. Apparently, they are expecting these fictitious snails to take up residence in the snail house.

To me, it just illustrates the fact that The Fairy should not be allowed to go shopping without my direct supervision.

Posted on January 29, 2016 by captaingreyhound

The Fairy and Chicken are both in bed so I have taken the opportunity to do some work on the computer in peace. I was unable to speak with Simon at the Department of Energy & Climate Change today, due to the fact that he is on holiday. I did ask for his mobile number but his secretary said it was not policy to give out personal information of that nature. He didn’t seem to have any objections to me trying to find it out for myself however, and sportingly wished me ‘good luck with that one.’

Thursday is one of my favourite days of the week for a variety of reasons so I have been in a good mood all day. Actually I gave myself the day off and spent most of my time playing and having fun with Chicken and Big Rabbit. It was nice to have a break from the usual responsibilities which fall on my shoulders, and I believe I’m beginning to appreciate the wisdom of Chicken’s policy of not taking life too seriously. I will do some further research on the topic and possibly send a copy of my findings to the Council. (I may have to deliver some staff training on the topic at some point in the future, but that is quite within my capabilities as long as I am provided with a computer which has PowerPoint.)

Anyway; back to Thursdays. What separates Thursday from the rest of the days, is that this is the day the local community comes together to show its appreciation to me. As any man will tell you, relieving oneself whilst out in a public area can be problematic at times, and it is heartwarming to know that my friends and neighbours will go out of their way to make this a little easier for me.

Thursday you see, is Porta-Loo Day. Nearly everybody wheels out a portable toilet for me to use. They leave them conveniently at the side of the pavements and alternate weekly between the green, brown and burgundy ones lest I become bored. The Council always sends a large truck and a small army of men to help position any that are out of place, which is very helpful, if a little noisy. I try to wee on every single one so that everybody knows how grateful I am and nobody feels left out. It’s the least I can do for such lovely people.